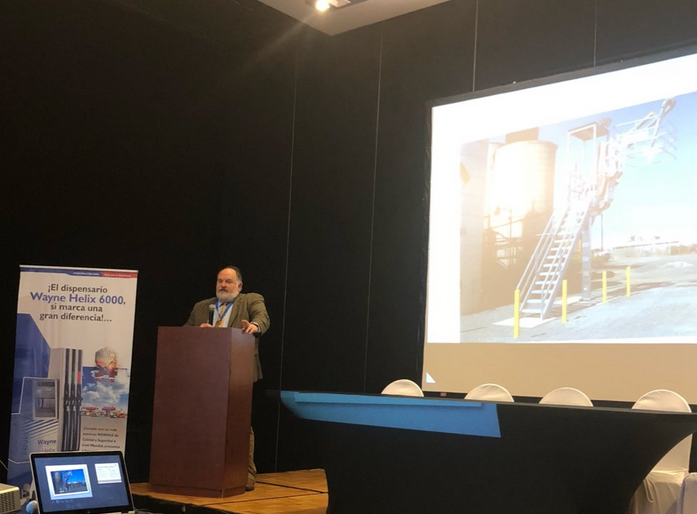 Splash blending of ethanol with gasoline was a trend seen in the U.S. about 10 years ago, but that logistics move went away when oil terminals with expanded storage capacities introduced in-line capability.

However, with Mexican gasoline wholesale and retail market beginning to find its feet following market liberalization a couple of years ago, wholesalers and retailers in Mexico may see opportunities for ethanol splash blending, similar to what the U.S. saw 20-30 years ago in the Midwest, Ron Lamberty, senior vice president of the American Ethanol Coalition (ACE), told OPIS in an interview.

Lamberty had been meeting and speaking with Mexican petroleum equipment installers, fuel wholesalers and retailers in Northern Mexico about the equipment compatibility and other practical considerations when switching over a station to offer E10 for the first time. He has visited Tijuana, Monterrey and Guadalajara in the past several months.

This meeting is part of a U.S. Grains Council's (USGC) series of technical workshops to address questions from local station owners as Mexico's transportation fuel sector continues to evolve.

"Some of the station owners in Mexico have the same entrepreneurial spirit the splash blenders had back when ethanol was first being introduced in the U.S.,"

Lamberty said. "For the first time in their lives, these marketers are free to buy fuel from someone other than the state-owned oil company. Now, on top of that, we're introducing them to opportunities ethanol can provide to them.

Everything from offering lower cost, higher quality fuels, to becoming a splash blender and actually competing with the oil company that ran their lives for so long. It's pretty exciting to play a role in the transition to E10 in Mexico."

OPIS notes that an introduction to potential ethanol splash blending in Mexico may offer possible gasoline blending profits, depending on an individual company's appetite for risk and competition on at the retail and wholesale levels. The pressing issue with ethanol in Mexico is the current lack of storage infrastructure to support this unprecedented move south of the border.

Currently, Pemex's gasoline supply contains no ethanol due to a lack of ethanol blending and infrastructure; however, current regulations allows Pemex to blend up to 5.6% of ethanol. On the other hand, other fuel suppliers in Mexico could supply gasoline with up to 10% ethanol. Pemex is seeking a level playing field, aiming to have across-the-board ethanol mandate for all suppliers at 5.6% or 10%.

OPIS notes that Pemex's inability to take advantage of a 5.6% ethanol blend allowance reflects the difference in CBOB specifications for gasoline produced by Pemex as well as a lack of ethanol storage tanks. In theory, ethanol is cheaper than gasoline, which would offer Pemex a more favorable bottom line for gasoline blending and production. However, suppliers with E10 gasoline could have a price advantage over Pemex on the streets in Mexico.

Lamberty said that there is no existing ethanol blending operations in Mexico due to the lack of independent and private terminaling capacities, but this could change in the future as more new private terminals are being built.

For now, there could be a potential for ethanol splash blending operations in northern Mexico as wholesalers and retailers could use gasoline and ethanol terminaling facilities in the U.S. When ethanol was first offered in many U.S.

markets, fuel buyers would bring their gasoline trucks into an ethanol terminal for ethanol top-ups after loading clear gasoline at a nearby pipeline terminal.

These days, terminals in the U.S. have more storage tanks, enabling them to capture that ethanol-blending margin themselves with in-line blending.

The main idea behind the push for ethanol splash blending in Mexico is to widen the use of ethanol as well as help suppliers in Mexico capture a potential profit margin of splash blending ethanol, which could be a penny a liter or more, he said.

The splash blending margin, which depends on the prevailing gasoline and ethanol prices, should be positive, considering ethanol is comparatively cheaper than conventional clear gasoline.

Lamberty made it clear that Mexico may have a potential for ethanol splash blending, but it will take some time to set up its own system in the country.

He said that it would not take 10 years of intense training and infrastructure development to introduce domestic ethanol splash blending in Mexico. "That's not going take 10 years. I can't say it will all happen in a year or two, or even five, but I can't imagine it would take 10 years," he said.

For now, "the more challenging issues are going to be the logistics of getting ethanol to the splash blenders, and fighting the misinformation already being spread by the entrenched interests in Mexico. It's already like Big Oil's greatest hits," he said.

Lamberty said that during his meetings in Mexico, he is focused on questions that have emerged about using ethanol following changes in Mexican law that took effect in June 2017 that allow up to an E10 blend outside of three major cities (Monterrey, Mexico City and Guadalajara).

Lamberty emphasized how retailers can make money and the practical implications of implementing and selling up to E10 blends. As ACE gets more actively involved in export promotion, the organization will continue to work with USGC to provide information to retailers and others who want to sell more ethanol.