Right now, ethanol prices are at record lows, and if there’s any upside to depressed ethanol prices, it’s the opportunity to open new markets. ACE's Ron Lamberty believes there’s an opportunity now for more retailers to begin selling low-cost E15 and for more consumers to start saving money at the pump.

The American Coalition for Ethanol (ACE) Senior Vice President Ron Lamberty hosted the third of ACE’s quarterly webinar series this week and was joined by Kristy Moore, Principal Scientist of KMoore Consulting. The webinar provided details of their efforts to help add ethanol to the fuel marketplace in Mexico, along with updates on numerous rules and regulations affecting ethanol sales, and retailer feedback and advice for selling higher ethanol blends and promoting ethanol to consumers.

The webinar opened with an update from Moore on UL listings for higher ethanol blends, several ASTM specs and initiatives affecting ethanol, and National Council on Weights and Measures (NCWM) challenges to higher blend ethanol labeling rules. ACE wanted the rules and regulations discussion featured prominently in the webinar because “too often, we go out and talk to marketers about offering new fuels in places they’ve never been, and we don’t give much thought to the heavy lifting that had to be done by Kristy Moore and others to make that possible,” Lamberty said. “There are a lot of potholes in the rules and regulation highways that need to be filled in and smoothed out before we can start using them, and we all need to be aware of how we can help in that process,” Lamberty added.

Moore talked about an ASTM Initiative to draft a new standard for quantifying the ethanol produced from cellulous and starch. “A lot of ethanol producers came to ASTM asking for the development of a standard that could be used by EPA and other authorities to determine accurate assessments of ethanol when produced by fiber,” Moore said, who serves as chair of the project. The specification would cover sampling, testing and calculation methodologies for quantifying how much of a plant’s production could be classified as cellulosic ethanol, qualifying for a D3 RIN under the Renewable Fuel Standard (RFS).

With the Reid vapor pressure (RVP) summertime restriction on E15 and higher blends ending this past Sunday, Lamberty believes there’s an opportunity for more retailers to begin selling low-cost E15 and for more consumers to start saving money at the pump. “If unleaded E15 is marketed properly, especially considering huge current discounts on ethanol, volumes will take off,” “Lamberty said. “And with millions of drivers using E15 all over the country, it’s more incentive for elected officials to get their job done and allow the fuel all year.”

“Given the low cost of adding E15 and the fact that 90 percent of cars and trucks can use it, “the math” favors E15 over gasoline,” Lamberty said. “Right now, ethanol is an unprecedented bargain, and if there’s any upside to depressed ethanol prices, it’s the opportunity to open new markets. Prices should encourage marketers to take a hard look at the market advantage they could gain by adding unleaded E15. We may see faster E15 growth than expected because the math is just way too attractive right now for any marketer to not consider.”

the data below demonstrates ethanol is more undervalued now than any time in history. The chart shows the annual average of actual rack cost (F.O.B. Omaha, NE) of ethanol versus rack cost of unleaded gasoline.

More marketers offering E15 would actually be good news to retailers currently selling unleaded E15. “Rather than wanting to corner the market on a new fuel, the more drivers see E15 across the U.S., the more comfortable they’ll become with the product, and the more likely they’ll choose it whenever they buy fuel,” Lamberty said. “We don’t need customers going out and looking for product that doesn’t exist. We need to find more people to sell it. Our focus continues to be finding more retailers and explaining how they can add higher ethanol blends.”

In addition to others joining the ranks, retailers want a variety of barriers to offering higher blends addressed, the most important being reliable, competitively priced supply, and continued viability of E85.

Lamberty added that another near-term market opportunity outside U.S. borders is Mexico, where he and Moore have both visited numerous times over the past year to work with fuel marketers and equipment suppliers on adding ethanol into the fuel marketplace. “Ethanol is an even better bargain there,” Lamberty said. “Ethanol’s price at the rack is more than a buck lower than unleaded gas.”

Lamberty noted building ethanol demand is as important as ever due to EPA’s actions this year in waiving certain refiners’ renewable volume obligations. “There’s been demand destruction that is reflected in ethanol selling at bigger discounts to unleaded gasoline than ever before,” Lamberty said. “Prices are getting so low we’ve seen some plants buttoning up for a while because EPA has artificially contorted the market in favor of gasoline.”

The chart below shows annual ethanol consumption from 2000 to 2016. 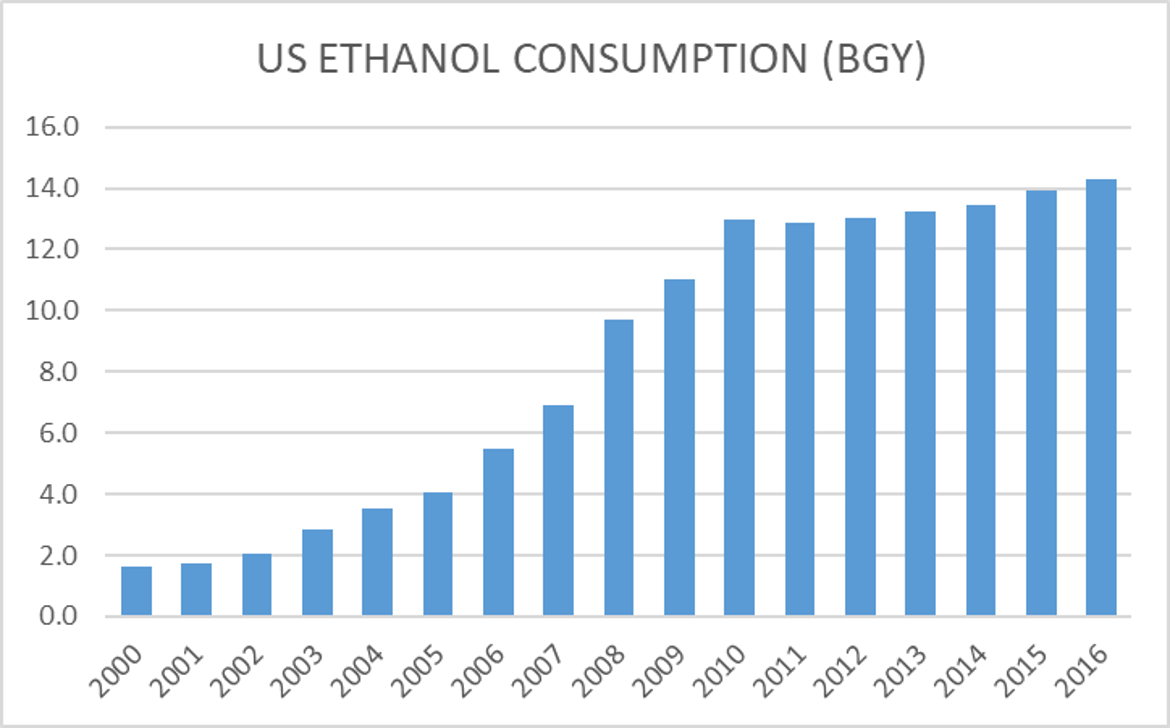 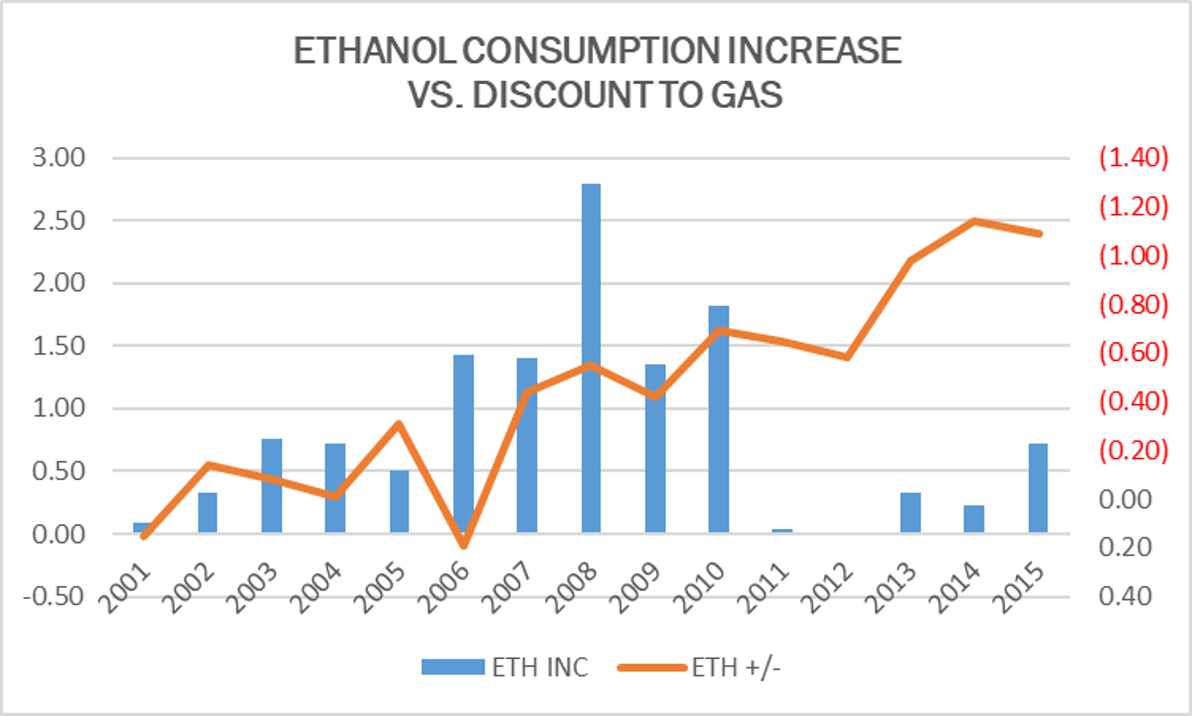 To view the webinar and download the presentation slides, visit https://ethanol.org/events/webinar.