The Greenhouse gases Regulated Emissions and Energy use in Transportation (GREET) model was developed by the Argonne National Laboratory to evaluate the lifecycle emissions of various fuels and fuel combinations, including ethanol and gasoline and ethanol-gasoline blends. Historic drops in ethanol's GHG intensity now point to incredible improvements by 2020 — just four growing seasons away.

According to the national lab, "The peer-reviewed model has laid to rest some long-held misunderstandings about ethanol (EtOH) and its important role in reducing petroleum use and greenhouse gas emissions. In terms of key energy and environmental benefits, Argonne’s GREET shows that cornstarch ethanol clearly outpaces petroleum-based fuels, and that tomorrow’s cellulose-based ethanol would do even better."

In new research from by ACE president Ron Alverson, the GREET model  both demonstrates a dramatic improvement in emissions performance over the entire lifecycle of corn-based ethanol and points to a continuing drop in the next few years. 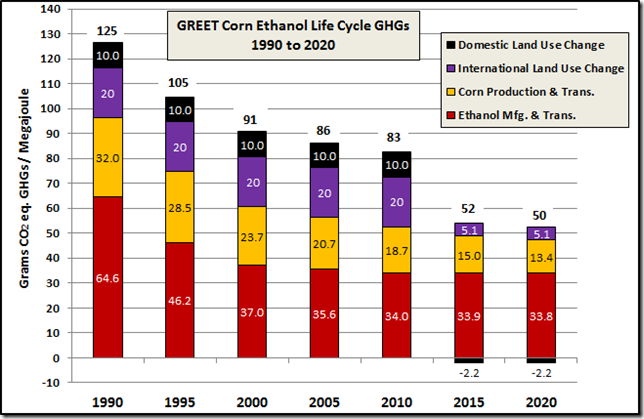 Alverson's research shows that, as of 2015, GHGs have dropped by nearly 60 percent over the  last 25 years and will continue to decrease with improvements in production efficiencies and even negative land-use change.

This comes at a time when petroleum-based fuels GHG is getting worse.