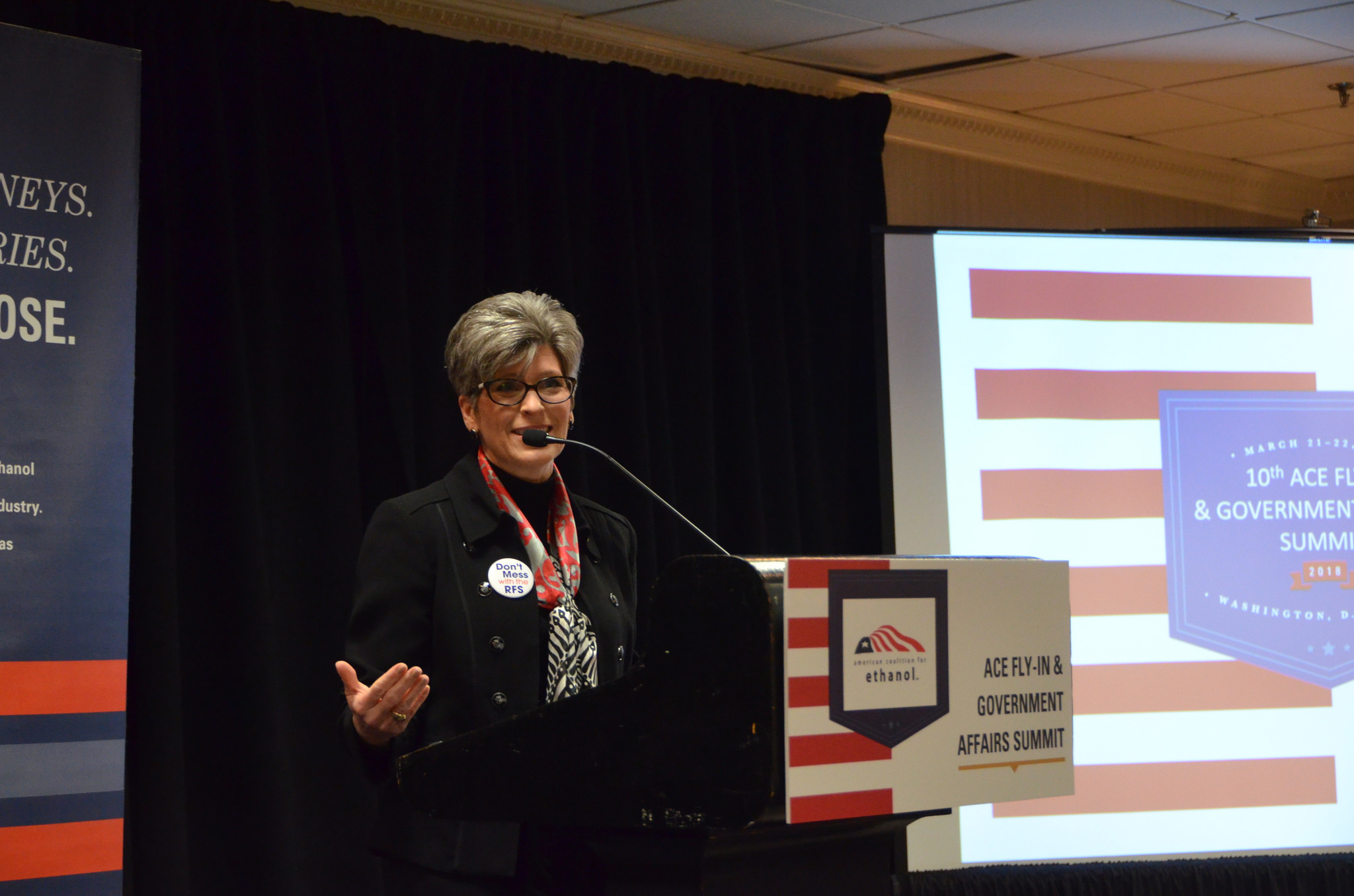 Washington, D.C. (March 22, 2018) – The American Coalition for Ethanol (ACE) and its grassroots members were joined by Iowa Senator Joni Ernst on day two of its 10th annual fly-in. Senator Ernst reiterated her commitment to defending the Renewable Fuel Standard (RFS) and being a champion for biofuels.  Excerpts from Senator Ernst’s comments are below:

“Rural America is the backbone of our country. The RFS is an invaluable economic engine creating good paying jobs, raising incomes, increasing tax revenues and offering new investment opportunities. In Iowa alone, the renewable fuels industry created $2.4 billion in household income and supported almost 50,000 jobs in 2017 and that’s just in Iowa. This represents only a fraction of the economic impact seen across the 28 states with ethanol facilities. The effects are increasingly widespread, and this all underscores the importance of a strong RFS today and well into the future.

“We’ve made it very clear that we will not support anything that will harm the folks back home and those livelihoods who are tied to the Renewable Fuel Standard; livelihoods like Charlie Good, another ACE member and owner of the Good & Quick in Nevada, Iowa, someone who fought petroleum marketers for 20 years before installing blender pumps and transitioning to flex fuels, E15 and higher blends. Charlie’s decision and success is proof that no ethanol blend wall exists and a prime example of how the RFS is restoring security in rural America and furthers the need for action so E15 and higher blends have access to the market.

“I remain strongly opposed to a RIN waiver cap mechanism, the proposed waiver credit would destroy demand and replace gallons of manufactured biofuels with paper credits. Any change cannot come at the expense of farmers, producers, and retailers across the country. I’ve stressed to the President and our Senate colleagues what millions across the U.S. already know and understand that a strong and robust RFS encourages consumer choice, investment, and innovation.”

“We express our gratitude toward Senator Ernst for her willingness to stand up for us,” said Brian Jennings, ACE CEO. “Our industry is very lucky to have Senator Ernst, Senator Chuck Grassley, and others leading this fight. Her advice to us was to be vigilant and that’s exactly what we need to do.”