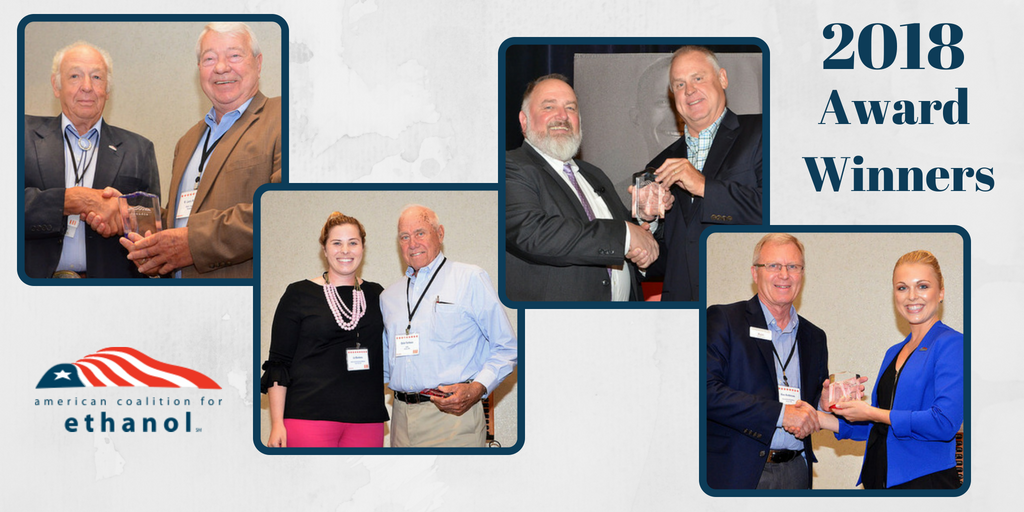 Sioux Falls, SD (August 21, 2018) – The American Coalition for Ethanol (ACE) honored a select group of advocates for their contributions to the ethanol industry during its 31st annual conference last week in Minneapolis.

The most prestigious award, the Merle Anderson Award, is named after the organization’s founder, who passed away last week at the age of 96. The award is given to individuals who display unmatched dedication to ACE and the domestic ethanol industry. This year’s award winner was Owen Jones, long time ACE Board Member representing Full Circle Ag of Britton, South Dakota. Lars Herseth, former ACE Board President, presented Jones with this honor. “I am truly humbled by receiving this award after his passing,” Jones said. “Merle not only provided leadership in the ethanol industry, but he was my mentor because he came from the same roots as I did.”

ACE also gives out the Grassroots Award, which is given to an individual who often performs “behind the scenes” to advance the cause of ethanol. Dale Tolifson of Benson, Minnesota, was presented with this year’s award by Liz Bunkers, ACE Director of Member and Industry Relations, for dedicating nearly 10 years of service on the ACE Board of Directors representing the Minnesota Corn Growers Association and Chippewa Valley Ethanol Company (CVEC). “I started farming in 1963 after I graduated from high school and got involved with the ethanol industry around 1990 when we decided to put an ethanol plant in our town,” Tolifson said. “The ethanol industry is the biggest thing that’s happened in my farming career and it still has a lot of potential. I never thought it’d go this far.”

ACE Senior Vice President Ron Lamberty presented Jetz Convenience Centers of Milwaukee, Wisconsin, with the Paul Dana Marketing Vision award. The award is presented to a company that has exhibited leadership in ethanol marketing. “I’ve been a fuel retailer my entire life, pumping gas from the age of six, and there’s been a lot of bad press put out there about ethanol,” said Bob O’Connor, Jetz Owner, during the retailer conference panel. “Years ago, I was convinced of that bad press, but when I did my due diligence and started to engage with the product, I found out I was wrong. Because of this industry’s efforts, I’m now on this stage as an advocate for your brand.”

ACE Communications Director Katie Fletcher also recognized Ken Anderson of Brownfield Ag News as the recipient of the Media Excellence Award, which goes to those in the media who demonstrate excellence in covering news and issues important to the U.S. ethanol industry. “I’m honored to receive this award from ACE, which is a great resource for ethanol-related information,” Anderson said. “Ethanol is very important to our listeners and readers across the Midwest and keeping them up to date on the latest industry developments is one of our top priorities at Brownfield.”