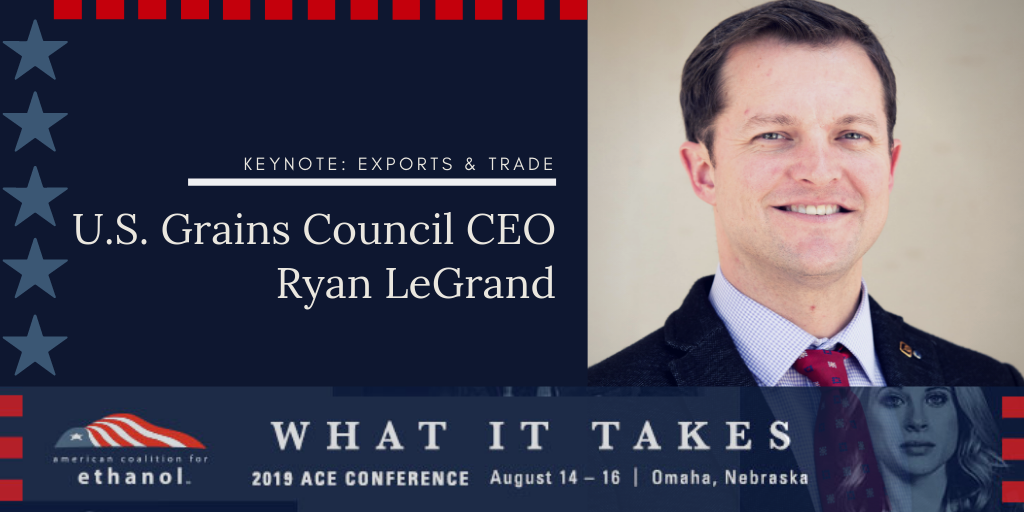 “Increasing the global use and trade of U.S. ethanol continues to be a commitment of the U.S. Grains Council and is even more critical for the U.S. ethanol industry and farmers given the difficulties they are facing at home with profit margins and abroad with market access roadblocks,” LeGrand said. “I look forward to addressing the markets we’re working to open around the world and the ones we’re working to defend at ACE’s annual conference.”

“One market the Council is working to open for U.S. ethanol is Mexico,” LeGrand added. “Having been in the trenches with ACE’s Ron Lamberty to educate Mexican petroleum marketers and equipment suppliers as Mexico’s fuel sector evolves, I’ll provide an in-depth update on our progress in the country the last few years.”

LeGrand served as the director of the USGC’s Mexico City office since 2016. In this capacity, he has overseen the expansion of the USGC’s programming in that country to include ethanol promotion and worked to steady relations during the negotiations of the U.S.-Mexico-Canada Agreement (USMCA).

“Given the extra attention on export markets and trade policy this year, we’re pleased to have USGC leadership join us to provide an update and answer questions for farmers, ethanol producers, and other conference attendees about the opportunities and challenges to increase ethanol and coproduct markets around the world,” said Ron Lamberty, ACE Senior Vice President. “Working alongside Ryan and his team over the last two years, as they build the foundation for U.S. ethanol market expansion in Mexico makes me confident he will do a great job leading the USGC and we look forward to hearing his perspective after his first few months in this role.”

LeGrand’s trade keynote address will follow Governor Ricketts’ welcome and an update from ACE leadership during the August 15 morning general session. Later in the agenda, attendees will get a more in-depth update of the ethanol promotion efforts in Mexico, by hearing firsthand from USGC representatives in the Mexico office ACE has worked with to help introduce ethanol into the fuels’ discussion in the country. Stay tuned for more information.