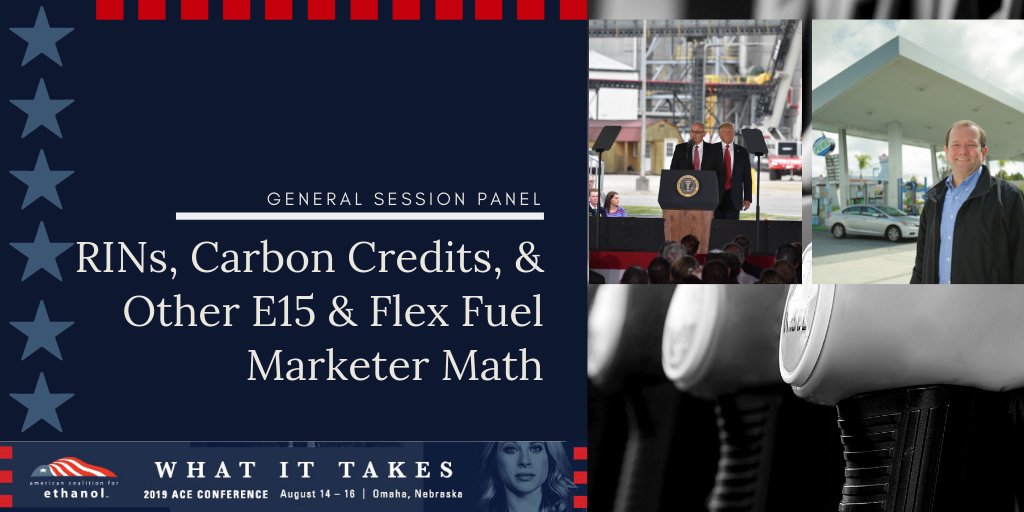 Sioux Falls, SD (August 27, 2019) – The American Coalition for Ethanol (ACE) hosted a diverse mix of ethanol interests in Omaha this month at its 32nd annual conference. Among the speakers were fuel marketers Randy Gard, COO of Bosselman Enterprises, which owns the Nebraska-based Pump & Pantry convenience store chain, and Mike Lewis, co-founder of California-based Pearson Fuels, one of the nation’s largest E85 distributors. Both spoke on the history and “math” associated with selling E15 and flex fuels, including Low Carbon Fuel Standard (LCFS) credits and Renewable Identification Numbers (RINs) and reminded attendees while year-round E15 could eventually move large amounts of ethanol, E85 is already moving massive amounts of ethanol and could move more.

Pearson Fuels supplies nearly 80 percent of E85 locations in California and sales have consistently increased, despite the state’s distance from the Midwest agriculture industry. In fact, the company sells almost twice as much E85 per year as is sold in Minnesota, according to Lewis. He also pointed out Pearson’s gallons didn’t dip when flex fuel volumes dropped in most other markets last year, primarily because California’s LCFS credits give E85 additional price advantages in the marketplace. Lewis expressed concern over the declining number of flex fuel vehicles (FFVs) being made available by automakers and encouraged attendees to get involved in the fight, starting with signing a free, online petition urging automakers to make more FFVs. Pearson has made considerable investment in encouraging state and federal policies to incentivize FFV production, and received good news on that front yesterday, when EPA issued an F factor for MY 2019, and announced it would be making a determination for future years soon. The F factor gives additional credits to automakers based on reduction in greenhouse gas emissions when operating on E85.

Bosselman Enterprises was one of the first marketers to sell E15 and E85 in Nebraska, and once they realized how to monetize RINs, that knowledge helped them quickly gain new market share. Gard said adding E15 and E85 and pricing both competitively has helped the company increase its gallons, customer counts, and average customer spend at its locations. Gard also showed attendees the new “Boss Fuel” brand Bosselman is now using at its Pump & Pantry locations.

“It’s a simplification of color, of nomenclature, of buttons, and our approach is ‘Boss Fuel is a superior fuel for the road ahead,’” Gard said. “We’ve increased our sales of E15 tenfold by giving it an identity.”

ACE senior vice president Ron Lamberty moderated the discussion, saying the two companies were excellent examples of ACE’s marketer-to-marketer approach of sharing success stories like Lewis’ and Gard’s with their peers at trade shows, workshops, and the flexfuelforward.com website.

“The best way to increase the volume we sell is by going to retailers who have already done it and asking them to share their strategies with their peers,” Lamberty said. “Bosselman has jumped from selling around 50,000 gallons of E15 per month to around 500,000, and Pearson Fuels has increased by a little less than a million gallons of E85 per year to almost 30 million now. These retailers are selling a lot more of our product than they were only a few years ago, and we’re sharing their success stories with interested retailers nationwide, so they can sell more ethanol, too.”

Lamberty will join Gard in Kearney, Nebraska, this week to provide the keynote address at a Nebraska Ethanol Board hosted fuel retailer training to educate them about selling E15 and higher ethanol blends. More information here.