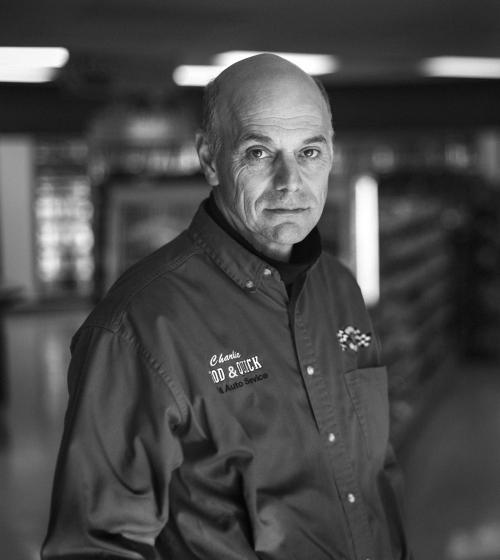 I fought that for 20 years. I was tied to a contract that I couldn’t get out of, and I can’t tell you how many times I opened my desk and read that damn thing and wondered how could I get out of this?

I own and run Good and Quick tire and automotive services, Good and Quick companies, I guess you could call it. Four different little companies into one. And I’m a ASE certified mechanic, and I’ve been in the business for 35 years.

I have had eight years of double digit sales increases…and I’ve been in an abnormal business compared to some people around and I’ve been very, very lucky.

Don’t take my word for it, my numbers wouldn’t be up if people weren’t buying it.

When you are going against two giants, just like I am, people look at me like what are you doing? You’re spending all of this money and you have two major corporations against you.

When I decided to do flex fuels, I was looking to upgrade my gas installation regardless. And I bid my gas installation at 150-some thousand dollars or a $140,000, and then my installer said to me, maybe you should look at the flex fuels and a blender pump. I told him, I can’t afford to do that and he said well, there’s help out there for you. And he says blender pumps are a thing of the future you need to be taking a look at this so I said what’s it entail? And he told me some things and I said let’s re-bid it then.

I applied for the building permit and all I did was give them the names of the licensed contractors that were doing the work for me. They asked me what I was going to do. I had already gone through the EPA testing – when I bought my location in 1994 it was a hot site (it had fuel contamination underground) so I had to clean it anyway. I had already gone through seven years of that. [The regulators] said as long as you are doing everything that you’re supposed to be doing, and you have certified people doing it, then we don’t have any problem.

I told my banker when I went and got the money, I’ve got to strike now, I’ve got to do this now. I have to get ahead so they have to catch me. I’m not going to catch them and my banker agreed with me and away we went.

I think I’ve made some of the right moves at the right time and I believe it truly was the right move because with the renewable fuels people, with their help and they will do every single thing they can do to help.

My diesel sales dropped some because the competitor put diesel out on the highway. I’m two miles from the highway so they took that from me, I put the signage out on the highway – interstate signs saying ‘Good and Quick, flex fuel, two miles’ ….I have people driving 25 miles to buy E15 and E30 from me. People tell me they plan their week, so they come this way when they need to fill up with more mid-grade ethanol – because I’m the only one who has it.

I offer E10, E15, E20, E30 and E85, I offer B2 and B5 diesel and then I offer straight premium for the people that don’t want the ethanol blends. I offer more fuels – you have to go around to five counties to get all the choices I offer here.

There is no downside, because if it were to fail, which I don’t think it would ever do, I would still have my equipment, would still be in the business and I could still sell fuel. There’s absolutely no downside to it.

I feel really good and very, very proud of the store that I have and the business that I have and I work very hard to do this. I love this business, it’s the only thing that I’ve ever known in my life and I spend way too many hours at this if you ask my wife about it too. I think I’m good at it, I enjoy what I do and I do it with a passion for one thing, and that’s to be the best, period.