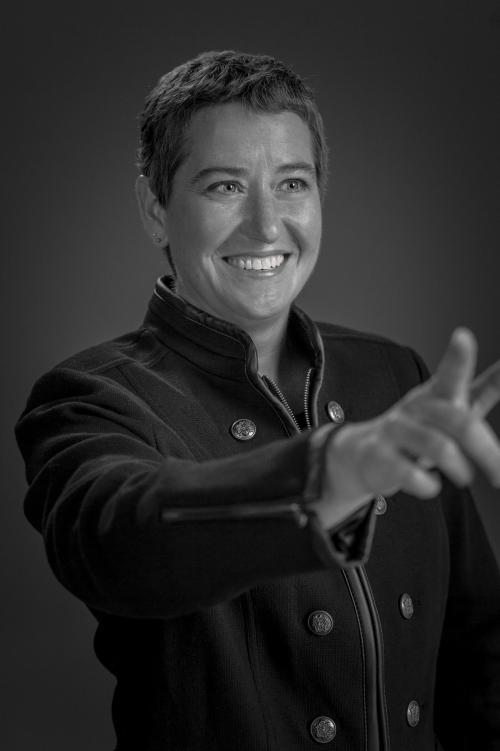 I just told people that I’m not going to let this thing beat me, and I had the right people around me to help support that.

I was having trouble with my arm. It would just start throbbing and aching. When they did an MRI, they found a tumor that had nothing to do with my arm hurting. It was non-Hodgkin lymphoma. I really found out by accident.

I had surgery, and I did six rounds of chemo, once every three weeks.

Lots of things got me through that. My family – the people I work with. When I was ready to go back to work I practically had to beg to go back to work. It was amazing to me how many cards I got from people that I might see once a year or might not see at all.

It’s my one year anniversary cancer free. Last year at this time, I didn’t have any hair and was just getting done with everything. This year, I’ve had a lot of people come up to me and say ‘You’re all well, right?’ – that’s nice and appreciated that people in the industry remember and obviously care and want to see you do well.

We really are involved in the communities we work in. We don’t just go from working with the client at the plant to the hotel. We try to go out to dinner with the board or the management team and be seen out in the community a little bit and have people know us as being involved with the plant and not being just a stuffed shirt.

I think there is a stereotype that in accounting you come to work, sit behind a computer, and crunch numbers all day long.

While that is certainly part of what we do, there is a lot more involved in our day-to-day life than adding and subtracting numbers. It’s really about those things that we try to do to help people achieve their goals and aspirations, and it may not involve any numbers.

I just got back from a trip to South Africa. With no TVs or radios, what you did at night was sit around a fire talking to other hunters and guides. During the day, you get to see the countryside and you see in the rural areas the way they do farming. Even their new tractors are the size of what we would consider a really old tractor. They are small and their corn planters are 4 or 6-row corn planters.

It was my first time traveling internationally. Now that I’ve done that, I’m thinking “what is the next trip?” I’ll go almost anywhere. Just tell me where I’m going.

My grandfather’s family was from that area, so my grandparents raised their family there, and then my dad and most of his siblings are still in that area, and I have some of my siblings and cousins there still.

The town I grew up in does not have an ethanol plant, but it’s not totally atypical of the surrounding communities that do have ethanol plants. I had a professional interest but there was also a personal interest in seeing what impact that does have on rural America. You can see in the small towns the impact that something like an ethanol plant does have on grain prices and also on the communities that they’re in. You see some of those towns get a shot in the arm.

There were five of us and one of my brothers and one of my sisters still lives in the same town we grew up in. In fact, my brother now lives in the house that we grew up in. I would say both of my parents definitely had an influence on me as far as work ethic, knowing what it takes to get something done, and sticking to it by not expecting others to just step in and either do it for you or give it you. Basically, go for it for yourself and be determined – and have the foresight to not think that things are going to be easy.

Certainly, I milked cows more than once in my life, and I would say it influenced me in that I knew that was not what I wanted to do for the rest of my life.

I always really liked math and school and so decided that something on the business side but also involving math was what I wanted to do. I had taken a couple of accounting classes in high school and just really enjoyed it and thought that was something I could do and be successful at it.

I’ve had a job outside of the house since I was in seventh grade. From then all the way through high school I worked at the local restaurant as a waitress – which also involved being the dishwasher and, every once in a while, the cook.

I went to community college first for two years and played softball there and got some of the basics out of the way and then transferred to KU. I worked for a CPA in one of the neighboring towns for summers and Christmas vacations. I was getting to apply some of what I was learning in school while I was still in school. I guess you’d call it an internship, before internships were popular.

I got my degree and have worked for Kennedy and Coe and now KCoe Isom with a connection to the agriculture aspect of our firm from the beginning.

Because of the fact that it is a dual commodity industry and business, it’s not like you can set your barometer on one metric and that’s what your key is. You’ve got multiple commodity metrics that you’ve got to monitor and be able to make decisions off of and then you throw the weather in there –who knows what might happen. People have got accustomed to knowing the valleys are going to come, and we’re certainly going to enjoy the peaks while they are here but not get lulled into a false sense of security during the really good times.

If somebody from the outside were to come to some of the national conferences and hear conversations that people were having – this industry still continues to amaze me how open and willing to share people are with more or less their competitor including what they are doing and how they are trying to do it as opposed to everyone just trying to get a leg up on the next guy.