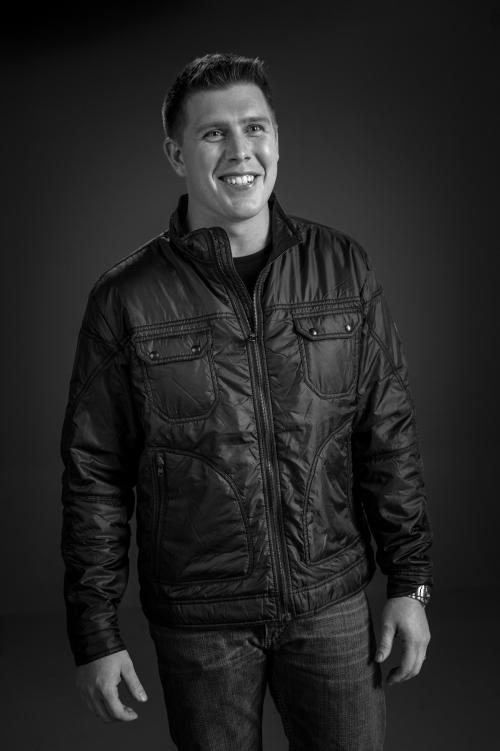 I remember looking at a photo with my brother and sisters standing in front of my Dad’s Starsky and Hutch-themed racecar that was parked outside our hometown bank and thinking how lucky they were to be there when he raced.

Photos like that were all in one album that had a victory lane sticker on the outside. The album is still at my parents’ house and we still flip through it from time to time. The earlier photos were still the 4” x 4” size with the rounded corners and only the last couple years had 4” x 6” glossy photos.

My dad raced back in the late 70s and early 80s before I came about, and he raced only a few races in 86 after I was born—racing has always been in the family.

When I was 15, I thought ‘I’m going to build a racecar’—I talked to my uncle and for a sponsorship,  he gave me a Mercury Lynx. We built it at my brother’s house. It took a few months, and we were learning as we went. My brother is a welder by profession, so he helped weld in the roll cage and do some of the body work.

That Lynx car was in the U-car class, which stands for ‘U can afford racing’. That only lasted about six races before I rolled it over.

In my second year of racing, I started using ethanol. I went to a bigger class car, and it had fenders and everything in front so we had a hard time keeping the engine cool. We started using E85 as our fuel to help the engine stay cool during the races.

We were kind of blazing the trail and continued to do so as we raced different types of cars and at several different tracks. Everyone now knew that I was running ethanol. And, everybody was very skeptical until I finished in front of them in the race.

The fuel that goes through my racecar is produced at the Benson plant (Chippewa Valley Ethanol Company)—which is 45 minutes from where I currently live. It could literally be the corn that’s in the field behind my house that fuels my racecar. Who else can say that?

My brother was into racing as well. In my second year of racing, we also purchased him a car. The two of us raced for a couple years together—against one another, actually. It was one way for me to beat up a little bit on my big brother. He’s eight years older than I am so I didn’t have much of a chance growing up. To this day, it’s something that my dad, brother, and I do together. We were up till almost midnight last night working on the racecars. Sometimes that’s the only time we see each other—when we’re working on racecars.

I grew up in Elrosa, Minnesota. The population sign currently says 166. We had three towns put together for my high school—Belgrade, Brooten, Elrosa.

As a kid, I was the paperboy in Elrosa for several years. I drove around in my go cart to deliver the papers. So, everybody knew me. I bet, on average, I got six cans of that assorted Boy Scout popcorn in those tins at Christmas from all the little, old ladies in town.

I went to Winona State to college—and got Bachelor of Science degrees in accounting and business administration. I interviewed at various accounting firms and had actually accepted a position in the twin cities. Then, on a whim, I came out here (Willmar) on an interview after running into a representative from Christianson and Associates at an accounting fair. I decided to come back here because, for one, it was closer to home.

We actually are a tight knit group and do a lot of firm events—whether it’s going to a partner’s cabin, taking a boat cruise, having a bean bag tournament inside on April 15 (tax day) because it is raining, or having the partners in a dunk tank in the parking lot to raise money for the local United Way. The firm has a big commitment to the community and sponsors a lot of local events. We also have C&A community teams—basketball teams, volleyball teams, softball teams, and even a curling team.

My very first clients were ethanol clients and are still the majority today. I generally have the backdrop of my computer or picture in my portfolio or something like that of my race car. So, I don’t necessarily bring it up, but it catches people eyes. We generally talk long enough and usually end up talking about what we do outside of work—and generally that’s one of my first topics after family because it takes so much time. And, of course, it’s a large passion of mine.

In the staging area at a racetrack, where you line up in your starting order—when you are sitting there while the national anthem is going or while the race ahead of you is going, there is always anticipation. I’ve been racing for 15 years, and I’m still nervous every time I’m sitting in that staging area. It’s a good nervous, though, it’s an exciting nervous.

I met my wife at a racetrack. The parents of one of her best friends in high school actually owned the track that I started racing at. So, she worked at the track. Four years later, I proposed at that same race track.

I always told her I wasn’t going to buy an expensive ring. I said I was just going to give her a ring out of a Cracker Jack box—so I did. The ring currently on her finger, I put it in the box and resealed it. And, then I gave it to her at the Intermission of my race. She opened it while the announcer watched and I asked the question. Her first response was ‘Are you serious?’ Then, ‘yes!’

My son already enjoys the racecar—he’s just 14 months. Every time he walks outside and sees the hauler he points and grunts.

I think ‘Power by People’ is really just about engaging with people and making a connection. I’ve found even in my working relationships—the more people get to know me the more they trust what I have to say.

Ethanol’s helped a small town tax accounting firm that began 25 years ago to grow into a national firm. To allow a guy like me to work 45 minutes from my hometown with companies from Florida to California to Washington state to New York. There’s no way I would have that capability working this close to my hometown without the ethanol industry.