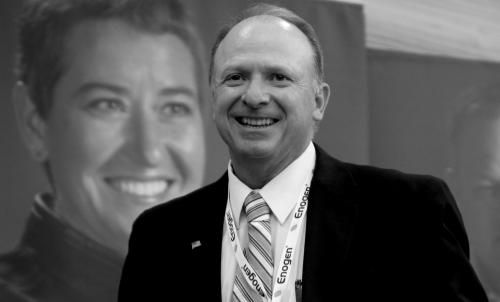 I have accomplished little by myself.

It’s usually been with a team of hardworking folks that do a great job.

I’m glad to have had a strong upbringing in rural America. In the 60s my father was farming but also became involved in the insurance and investment world. My exposure to that helped me to become a financial advisor and gave me opportunities in that financial services world which was a great asset and is still a great asset in my job. He’s been one of the greatest influences in my life.

I was introduced to ethanol when Golden Grain Energy was getting up and going. My father was serving on the board there. They would have several meetings in our office because we were conveniently located and had the space. The discussions drew me in.

At that point in time, billions dollars were headed out of our economy for foreign oil from places that didn’t like us very much. It was very clear to me that if my children and our children and coming generations of children were going to have the same opportunities that we’d had, this could not continue.

I was aware of the location where Absolute resides, and I started asking some questions about it and I knew I had a short window to act. I stopped and visited with Tom Edgington about considering the ethanol plant. It was never my intention at that point in time to be the CEO but he just looked at me and said I’m looking at the president and CEO right now. Shortly thereafter, we had a meeting with Tom, Greg Goplerud, and Steve Neeley, and away we went.

I was living in Mason City at the time Holly and I met. I saw Holly going into her apartment building one day and I said ‘someday, I’m going to meet that gal.’ A few weeks later out at a dance club talking to a mutual friend, Holly came over and we started visiting. Pretty soon she was asking me to dance.

After we got married, we lived in a small town outside Mason City called North Springs.  After ten years, we bought the acreage and the house out in St. Ansgar. It’s a successful farming community with a strong manufacturing base. People would be surprised with how strong the local economy is. Some of the best farm ground around is in this region.

I grew up on the family farm in Riceville, Iowa, which is in Mitchell County. I was rambunctious and inquisitive as a child: a ‘type A’ personality. Holly is from Mitchell County, too. Her great, great grandfather is one of the earliest settlers of the area—and his grandfather was instrumental in the Revolutionary War. Today, we’re living very close to where we grew up.

Holly and I have worked more on the ‘us’ than the ‘me’ and the ‘I’ and that’s a key thing.

We had three boys. One girl. They were all good kids. We were blessed.

We taught them self-reliance. We had a Christmas tree farm for many years. The point of that was to teach the kids how to do business and each one of the kids received the proceeds from that to pay for their college education. Each one of them graduated from college with no debt, but they earned the money to do it. They understood the work it took to earn a dollar.

A few years ago, I was frustrated that the value of the RINs and the value of the ethanol and the price discount wasn’t making its way down to the consumer level, and it wasn’t even getting to the retailer. It was being stopped at the terminals and blenders.

I visited with folks in the area who were in charge of blending and did everything I could think of to encourage them to pass along that incentive down to saying ‘If you won’t, we will.’ And, I don’t think they thought we would.

Absolute got all the permitting, put in the equipment, and created the marketing arm to do everything to be able to sell directly to the retailers. Now in this area you can see the reward whenever you pull up to a station that offers E85. The majority of those savings are showing up and the consumers can reap those rewards.

There’s quite a few other ethanol facilities that are doing the same thing—selling directly to the retailer. That’s good.

I’m lucky to be able to do what I do and enjoy it. And, what we do matters. We’re blessed to have a job that has such an influence in what’s going on and to help others to do the right thing.

Power by People speaks to the concept of grassroots and creating opportunities for rural America. When we talk about jobs in the United States, these are the faces of the people who have those jobs and are creating those jobs.

We’ve got great people in the industry. Just think about all the people we get to rub elbows with. It’s a nice crowd.

ACE does a marvelous job getting a good message to our legislative folks. ACE has reached out to people who aren’t as familiar with rural America, knowing that it’s not just the people in the pew that need the sermon. That’s a good component to what we’re doing—have a lot of meetings and have good, productive discussions with folks in the House and Senate.

The future is bright. There’s lots of opportunities for mileage and market share for the ethanol industry. And, that’s yet to be done. That creates a nice future and a nice opportunity for growth.  Additionally, while we’re 10 percent in the United States, there are countries that are using very little ethanol.

I think one of the things that sticks out most in all the traveling I’ve done is how great our own country is. When you’ve seen these other societies and economies are working, you’ve got a greater appreciation for how we have things in the United States, the opportunities. Where a farm kid from Riceville, Iowa, can grow up to be a CEO of a successful organization. I’m appreciative of that.

As a nation and an industry we have a good past, but we have a more promising future. I am extremely bullish on ethanol and renewable fuels because we make ethanol, they take oil. We can make forever. You have a finite time that you can take. The future is bright. Two hundred years from now, the future belongs to renewable fuels.

We’ve got right on our side.